What will come as a surprise to absolutely no one paying attention, minors are still secretly being allowed into the Furry Raiders grooming Telegram.

Over the years several Furry Raider admins have tried to play innocent about this, claim that they themselves are against it or are clean. Jolt Squirrel has been one of them, but the following exchange proves that Jolt very much understands minors are in the chat. He is on board with it and doesn’t care. Unless, of course, he gets caught.

Recently, someone in New Zealand by the name of ‘Axyl’ got pulled into the Furry Raiders. The fact that he was underage came to the attention of one of my sources. 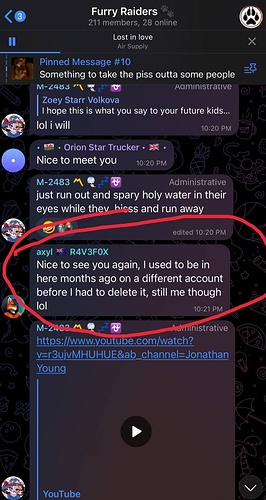 The source, rightly concerned about this, took the issue up with Jolt Squirrel on October 14th.

We waited three weeks, partially to give Jolt a chance to do the right thing, and partly because I have a backlog of articles and other projects going on. When it became clear to me that Jolt didn’t care that sixteen year olds are in the Raiders, I got fed up and messaged Jolt myself

What happened next was a flimsy attempt by Jolt to cover up. I sent the message to him on November 5th and Axyl was suddenly kicked out. I noticed this and Jolt said he “needed to confirm” the tip. As if by magic, as soon as it was clear that DissidentFurs noticed that Jolt was covering up from Foxler, Jolt was able to “comfirm” the tip. 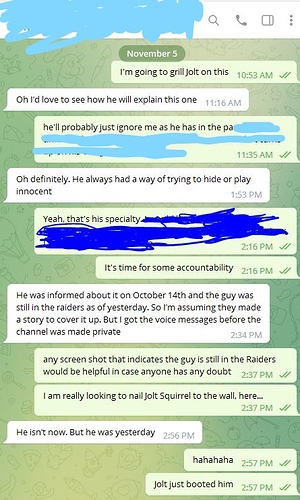 Keep it real Jolt: The truth is you don’t care if minors are flirting around in your chat because that’s just what your loser “boss” Foxler wants. You may have the Crucifix in your profile, but you aren’t living anything close to an obedient life, not by a country mile.