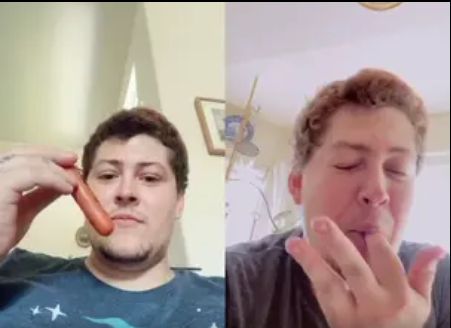 It pays to be subscribed to Furry channels, particularly the ‘Furry Cringe’ channel on Telegram, because every once in awhile you come across a lead on one of the many people in the “furry community” who partake in beastiality or child grooming.

Not too long ago, this video turned up on the channel.

To those who didn’t click, it is a tiktok video of a ‘pup’ fetish player in fetish gear trying to play kiss a toddler, who looks to be about 2 or 3 years old. Apologists in the ‘fandom,’ or the so-called ‘fetish-community’ often make apologies for this kind of thing, calling it innocent fun. No parent in their right mind would let a stranger dress up in fetish gear and get that close to their child, much less play a ‘kissing game.’ Needless to say, “innocent” things such as this are often an early step in grooming children into this “lifestyle.” In a healtheir time, this would be considered sexual abuse.

But aside from that, who are the people behind this? The clues we have are that this pup fetishist with the child is not the girl’s actual parents, but is rather an “uncle” who the parents know. Googling the TikTok handle ‘Shilohbeanandfam’ came up with this; another TikTok video from someone named ‘SkyeDeon’ doing a duet video with ‘ShilohBean.’

‘SkyeDeon’, surprise surprise, calls himself a ‘male to female transgender.’ That page thankfully provides a link to the profile of ‘ShilohBeanAndFam.’

That bread trail leads to the source. ‘ShilohBean’ apparently goes by the name Nate Jorgenson, and in the list of videos is a bunch of them with the same toddler as in the “Uncle Alex” video. The ‘SkyeDeon’ also has unique TikTok videos which include the same toddler. Chances are, ‘SkyeDeon’ and Nate Jorgenson are married and seem to have adopted this poor girl. Both video accounts include sexually suggestive content that are mingled with separate TikTok videos with this poor girl.

They aren’t shy about it. I suppose they have reason not to be: If they live in a blue state they have nothing to fear from the state getting involved in this grooming and abuse. Truth of the matter is, Mr. Jorgenson is not fit to be an adoptive parent.