Furry Raiders getting Banned from Furmeets 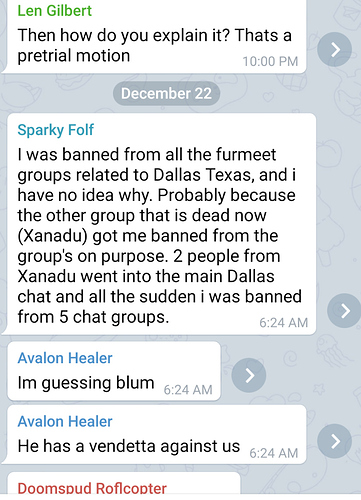 At the end of last year, Alt Furry and the Furry Raiders officially parted ways over Foxlers public support of zoosadist KeroTheWolf. The split left many people with a tough choice; either Xanadu or the Furry Raiders. Many people left Xanadu and sided with Foxler, including SparkyFolf, a Dallas area furry who vocally criticized Xanadu, Blumiere and Len over their split with Foxler, calling us ‘right wing SJWs.’

Since the split, Foxler has been arrested for alleged child enticement and another Raider admin was arrested for intimidating the accuser in that case.

Last week Sparky said he got banned from all Dallas area furmeets. Instead of taking responsibility in the stupidity of choosing to publicly associate with Foxler and Sneps, Sparky blames Xanadu for getting him banned from furmeets.

Sparky has previously referred to Foxler as “his hero.” Based on what I know, Sparky is one of the worse victims of Foxler and his “social engineering” (which once resulted in Foxler getting a visit from the FBI), and is the latest collateral damage in sticking with Foxler despite all evidence.

Listen to me, folks. Foxler used his Furry Raider group to allegedly try and get sex with underage boys. He then drew from his group to get the accuser to change his story. If you’re in the Furry Raiders, you will be held socially accountable for enabling this, and it will cost you.

It’s high-fucking-time you people own up to your errors in judgement, repent, and avert course.