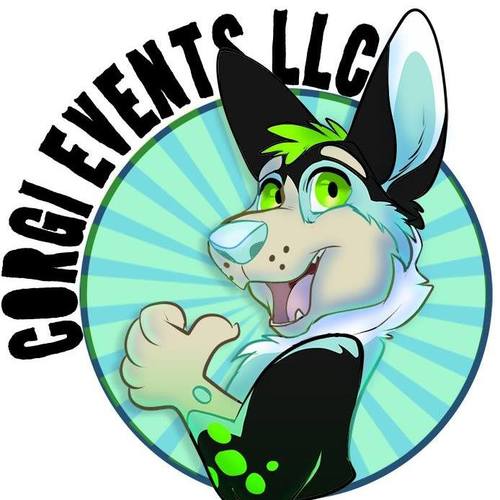 First of all, I want to apologize for the lack of articles over the last couple weeks. My attention has been in several other places, but there are a lot of things going down in the fandom as the Corona Virus totally ravages the Furry scene. But please stick with me, as I intend to keep exposing the fraud and predatory behavior that is everywhere in the furry “community.”

This article will be the first of several on Corgi Events, which is probably the most corrupt sponsors of furry conventions in the US. Corgi is marred by credible accusations of unpaid prizes of all kinds, financial improprieties, and Jerry-Springeresque personal dramas. Today I will focus on Treble, aka Corey Wood, the disgraced founder of Corgi Events. You might know him as the guy alleged to have swindled $40,000 from Chicago-based fursuit company Lemonbrat.

Lemonbrat alleged, and I believe them, that Corey Wood set up separate Square accounts to Lemonbrat which diverted money to Wood’s personal bank account. In addition, they allege that he wrote “bogus checks.” 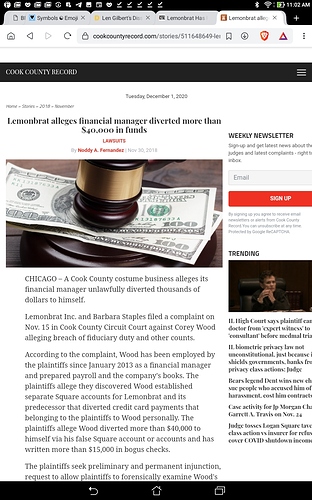 Upon hearing this, Corgi Events swiftly announced they were disassociated from Wood.

Painted Desert Fur Con (PDFC) announces that Corey Wood (Treble) is taking a leave of absence from the staff of PDFC for personal reasons. Mr. Wood is currently addressing a personal matter which is unrelated to PDFC or his involvement in the...

Anime Milwaukee, another one of the handful of events associated with Wood, broke ties as well,

In light of recent news, please read this message from the Entertainment and Culture Promotional Society Board of Directors: ECPS (the parent organization of Anime Milwaukee) takes attendee trust...

As of Wednesday, Nov 28th we are no longer affiliated with Corey Wood/Treble. He no longer works with us. If he was your contact for orders, and you have inquiries about your order please contact us...

Unfortunately for Lemonbrat, Corey Wood seems to have weaseled his way out of this one. Looking at the civil court documents from the Cook County Circut Court, the case was voluntarily dismissed by the Plaintiff, in a motion which is typically used so that the Plaintiff, in this case Lemonbrat, can correct a “flaw” in their complaint. In other words, they screwed up. 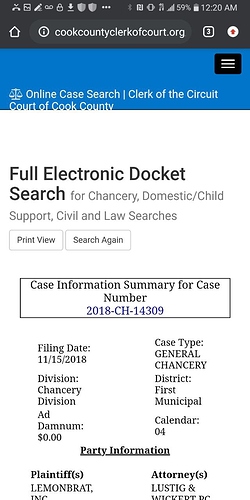 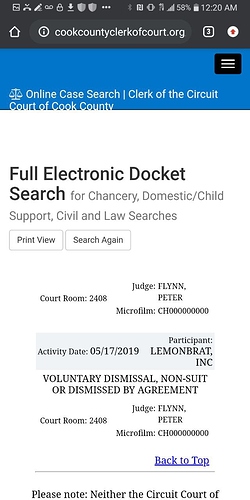 Despite what Bubbles and others from Corgi Events may say, Corey Wood is indeed still running the show. In fact, in the “fandom movie” by Ash Coyote, released in December 2019, Corey Wood can be seen working behind the scenes in DenFur.

And, in fact, Wood still has himself as the CEO of Corgi Events on his Twitter account. Hopefully, it all ends up being a moot point, as the chances of Colorado and California allowing a thousand plus person gathering these days is next to zero. Nevertheless, here he is. The shell game continues. 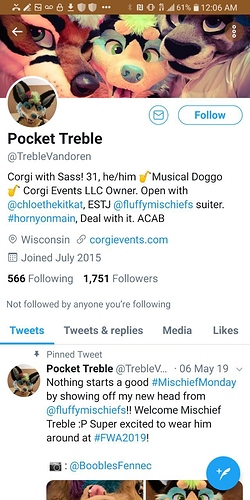 If you’re a furry, don’t go to Corgi Event cons. This includes DenFur, Painted Desert Fur Con, Aquatifur and SoCal Fur Con. This is a for-profit corporation, headed by a guy with a shady history, who pretends to donate proceeds to animal charities. This comment, I believe, sums up Corey very well. 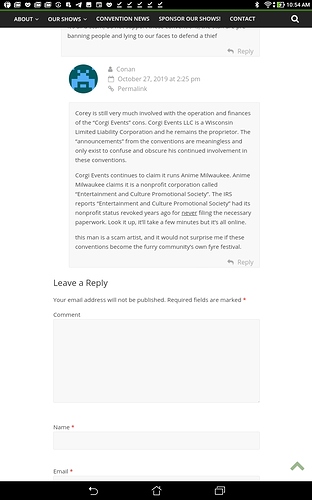