Confirmed: Growly Ambushed by Security, Kicked out of Hotel in California Con 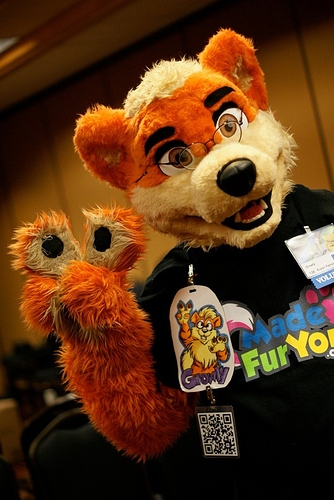 Last year there was a rumor swirling around that Growly, the notorious convicted child sex offender, had been kicked out of a Fur Con by security. I tried to follow up with those making the claim, but got nothing at the time.

A fellow on twitter named Quixbull is reporting that Growly was forcibly removed from a convention by security. http://archive.is/a9Ko4 I tried following up for answers but got nothing from this individual. However, he tweeted a week earlier that he was going to AZFC in Phoenix. [quix] Growly has gone to AZFC repeatedly before, including organizing parties just outside the con a few years ago. Looks like ONE MORE CON that Growly got the boot from. If so, good fucking riddance. Any comments…

Since then a source, who would prefer to remain anonymous, has confirmed this rumor. While I initially suspected Growly was booted from AZFC, it turns out the convention was actually Golden State Fur Con, a convention run by Corgi Events.

Granted, I am not going to reveal a source that talks to me, so the story I am about to tell, you will just have to take my word for. I can attest that this is a credible source.

Growly was surely starting to realize he wasn’t welcome in many cons, prior to “missing” Anthrocon and being pre banned from several others. Allegedly, Growly approached Treble, the owner of GSFC, and asked if he was pre banned from GSFC. When he learned that he wasn’t, Growly came to the hotel to show up at one of the unofficial gay fetish sex parties hosted in the hotel rooms.

What happened was this. When Growly showed up, someone made a call to con security. Security was there in minutes, as well as a hotel rep who informed Growly he was not only banned from the Con, but also the hotel itself! Growly was lured into the con, and then removed in a very public fashion. Brilliant.

If this situation sounds familiar to you, it is also what happened to Foxler when he showed up at DenFur, another convention run by Corgi Events.